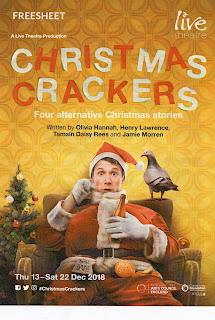 Christmas is all about family and each of the plays explores the an aspect of a family Christmas.

Clementines  follows three siblings as they struggle to cope with a Christmas without parents. They squabble with each other, deflecting attention from their own problems by highlighting someone else's.

In Grounded an injured pigeon becomes the vessel to explore the relationship between a boy and his father, revealing how a breakdown in communication leads to misunderstood expectations on both sides.

Home for Christmas tackles homelessness, compassion, charity, and trust - or mistrust - among friends.

The final tale Marbles is the most poignant of the four and has a very different feel, revealing the disparity between memories of the past and the reality of the present.


The writers have each chosen an aspect of Christmas and observed it beautifully. The plays are funny, poignant and emotional. Relationships are acutely observed and effectively portrayed in a very short time - the plays are each just 30minutes long. Each one is a like a snapshot that captures the subject but reveals so much more going on in the background. The five actors move assuredly from one play to the next, transforming from themselves from one set of characters to another in a series of convincing performances.

Christmas Crackers are four tales of an imperfect Christmas. Grounded in reality, they give the essence of the Christmas message without the saccharine sweetness of the TV commercials.

They play until 22nd December at Live Theatre.

Posted by Michael Hunter at 1:59 PM