Let us make it up to you -Review- Alphabetti Theatre

Let us make it up to you 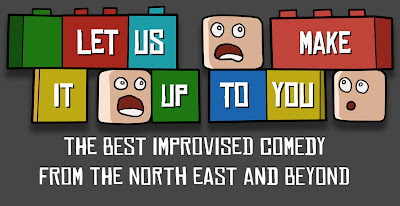 This was the inaugural gig of let us make it up to you, the improv fabaganza, one of two monthly nights of improv at Alphabetti. The format of the show is split into three thirds the first third involving the house band the hang. The second third of the show involved local improv group Spontaneous Wrex and the third third (that’s a mouthful) involved nottingham improv duo the clones.

Owen Scrivens and Alex Fradera co founders of the new night introduced us to the delights of improv to come. Carefully and amusingly introducing us to the art of improv. Next up all the acts get on stage and we are told a story improviser at a time with different styles of story telling such as choose your own adventure and horror, simultaneously other improvisers acts out the story, which was quite amusing.

Next up the house band the hang, four improvisers led by Alex and Owen who initially took suggestions on what might influence their characters in a bar scene. Suggestions included curling, a knife, hogwarts and a cow. The improvisers did several long form scenes using these suggestions to create a narrative. There was quite a lot of stabbing and drinking in these scenes and you couldn’t tell that first time they had performed it. Very amusing.

Before the break the audience were told to do some drawings to inspire scenes for Spontaneous Wrex to thread into narrative, which they did quite seamlessly. Starting off with an apathetic depressed but environmentally concious dog called Tommy, being underwhelmed and some goldfish and a bomb with feet. Which was a hilarious narrative that ended in space, it was as convoluted and cathartic as it sounds.

In the final third We had guess spot the clones from Nottingham. They took some interesting suggestions from a reluctant audience, including Chlamydia, a windfall and what seemed to be the theme of the whole night friends that are friends not ‘friends’. The clones did two scenes and each played two characters, sometimes interacting with themselves, which can be problematic, but they made it work. We initially started in a car with two friends arguing and the revelation that one of the men’s ex was going out with the other friend. Then we arrive at a gathering with the lady in question and the guy she had an affair with to make some awkward scenes, including the resistance of polygamy. The Physicality felt very real and the interactions were very dramatic and believable and funny to boot.

Finally everyone came back together before the end of the night to do an imprompt song with Owen on Guitar. With a suggestion from the audience of a song about wedgies, which was as you would expect quite catchy, wedgie, wedgie wedgies. This was a great start to let us make it up to you and shall be here at Alphabetti every month with a different line up.

If you love improv be sure to check out :

4 1 night only on Saturday the 24th February @alphabetti Theatre

Posted by Michael Hunter at 9:33 PM