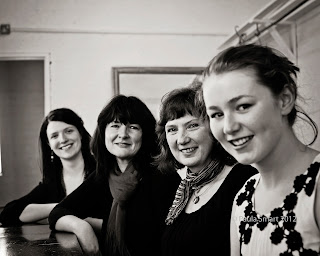 Quick Bright Things, written by Alison Carr as is part of the RSC’s Open Stages project, which asked for theatre companies to look at Shakespeare in a different way. Quick Bright Things most certainly does that. It is an innovative and interesting play looking at the relationships of four characters from "A Midsummer Night’s Dream". Focusing on in particular the play looks at her relationships before and after the eventful night in the forest.

The play is in three parts and is a “promenade – each section taking place in a different part of the theatre. This means that the audience has to be quite small – a maximum of 40 people. Instead of being seated in the auditorium as spectators we were taken to different areas of the theatre – some not usually seen by an audience – for each scene.
I did wonder whether the promenade aspect of the production would add to or detract from the experience, but it does indeed add to it. Because the audience is so small you feel you are a part of the production – sharing the space with the performers, they seem to be talking to you directly, making eye contact with members of the audience and drawing you in.
The first scene sees a teenage ; out on a first date with an unnamed “lad”. He may be Demetrius, or Lysander, we never know his name. They meet up before a party, and the setting for this scene is the theatre’s Green Room bar. Perfectly performed by Grace Dickson, Matt Aldridge and Hannah Harrison, they captured all the angst and awkwardness of the situation.
A short walk under the and then onto the stage for Scene two, as we join the lovers  in the woods – this time acted with the Shakespearean dialogue.  Warmly humorous, this tells of the breakdown of the girl’s friendship as the men (Sam Hinton and Patrick Robertson) are bewitched and fall out of love with Hermia (Kelly Godfrey), and into love with .
Finally we are taken backstage to the dressing rooms for an intimate monologue with , older, and wiser, but not happier.
Moving around the theatre creates a physical separation between the scenes, and I felt added and air of mystery and adventure. Each setting has its own atmosphere, in particular the stage for scene 2, which is eerie and magical, as befits the story being acted out, and the very intimate final scene with  where she speaks directly to the audience in a very small room – just feet – and in some cases inches from us!  The audience is actually divided at this point, so small are the rooms - so there are two Helena's for the final act - Moira valentine and Penny Lamport. This is an impressive monologue - beautifully and touchingly performed.
The play is a very interesting look at the consequences of that night in the woods. Love is found and lost and found again, but true love is not necessarily perfect! Friendships are stretched to snapping point. In Shakespeare’s play we are left believing that the mischief has been righted, but Alison Carr’s play looks beyond this, to the repercussions of the magic. Reality and dream worlds collide and distrust is born. Nothing has been quite as it should for the four friends ever since that night.
I loved the whole experience and recommend it unreservedly. It is showing until the 21st April and is well worth a visit. A very different theatrical experience.
Denise Sparrowhawk
Posted by Michael Hunter at 12:48 AM