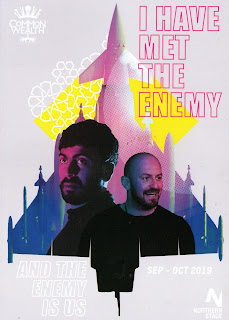 Staged in the upper room of Byker Community Centre, this is a theatre experience with a difference. There is no stage, and no seats, we are invited to move around the space, interact with the actors and each other, but not to touch anything -unless specifically asked to do so... I enter the room, soft music is playing and there are structures with lights dotted around. "Hello, I'm Alex, how are you? Have you been to an arms fair before?" Within minutes I have been greeted by four people, and given advice on personal security by two of them, invited to look around, sample the refreshments and enjoy... Audience participation is not my thing - unless you count booing at the baddie in Panto, but I go with the flow as best I can. I hope I won't be called on to do more than make small talk.

This is not going to be your average theatre show.

In the prologue of the Arms Fair, we are introduced to the latest technological killing machines by a series of salesmen with slick sales patter where names such BAE and Rolls Royce are dropped into the conversation. And then the narrative moves to the more personal stories - of Alex, a British soldier, veteran of the Afghan conflict, Mo'min, a Palestinian from the West Bank, an actor, now living in London, and Shatha, an artist in Yemen, who appears via a pre-recorded video. They tell of their own experiences of war, of air strikes, of guns and bombs. Each one told from a different perspective, each one very personal. Each one painful. And each one the direct result of British arms deals.

Their stories are enhanced ad illustrated with the strange ticking light box props. These it transpires are metronomes. There are seventy two of them, representing the seventy two Eurofighter jets sold to Saudi Arabia and used in Yemen. The ticking of the metronomes echoes the Domesday Clock, ticking down to the destruction of mankind.

I Have Met The Enemy is hard -hitting, political theatre. It does not pull punches. But it is also compassionate and human, even as it highlights the inhumanity of the arms trade. These are real people, and their experiences are real. Their losses are real. Their fears are real. Their stories draw you in, you are delighted by the thought of Alex's mother walking her dog in Wales, of Mo'min out with the sheep and the horse, and of Shatha dancing at a wedding. But, they pull no punches - just as you settle into the stories, a gun is levelled, or a grenade is thrown, or an airstrike hits. Blood mixes with jasmine flowers.

It raises so many issues, asks so many questions, and leaves us uncomfortable, thinking about the consequences of war, and our part in it.

You can meet the enemy at Byker Community Centre until Saturday 26th Oct.

Denise Sparrowhawk
Posted by Michael Hunter at 1:04 AM